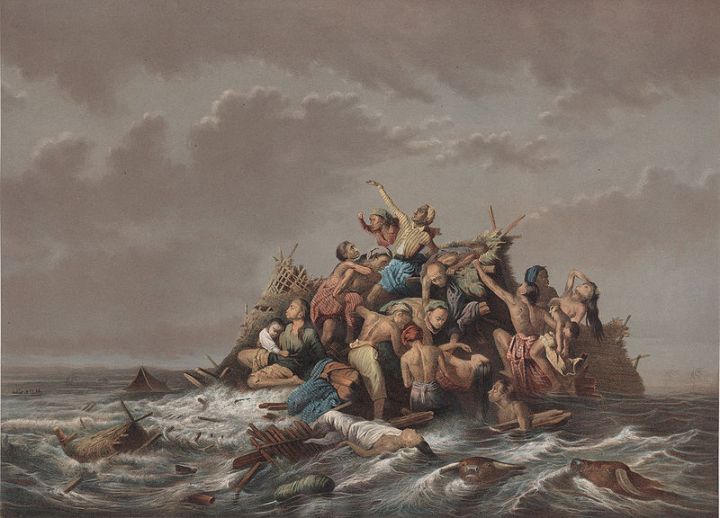 1) Wipes humanity off the face of the Earth in flood

So back in the day, way, way back that is, God looked at His creation and saw that it was good no more. Violence, sex, theft, greed, you name it humans were at it. They made the last days of Rome seem like a church picnic. There was only one answer. Highlight, delete and start again. All except for Noah and his family, the only righteous people left on the planet. So God decided to treat everyone to a little waterboarding for their sins. And since swimming lessons probably didn’t feature much on the school curriculum in a mostly land-locked region, its fair to say the general populace didn’t last long. It was nothing less than a five-star ass-kicking.

2) Destroyed the cities of Sodom and Gomorrah

Ever wondered where the words ‘sodomy’ and ‘Gonorrhea’ come from? Yeah, me neither, but since you asked, the surprising answer is found in the Old Testament. The story goes that sometime back before fidget spinners there were two cities, Sodom and Gomorrah. And apparently the inhabitants had failed to learn anything from the ‘great flood’. Either that or they were suffering from some sort of collective amnesia, because once again, they were up to no good. What were they doing? Did I mention sodomy and gonorrhea? Right, you get the picture. So God decided to blast the two cities into non-existence by incinerating them in a massive explosion of fire and wrath. It was a mighty ass-kicking that was heard from many miles away.

3) The ten plagues of Egypt

If I’ve learned anything from the TV show ‘Roots’, other than that ‘white man’ be the devil, it’s that slavery is a bit of a party pooper. So when God learned that the Egyptian Pharoah had taken His chosen people, the Israelites, into bondage, a certain someone wasn’t too thrilled. God responded in the only way He possibly could by unleashing ten deadly plagues on the Egyptians. Locusts, diseases, deaths of firstborn, dry lips without vaseline, God went to town and soon the Israelites were leaving town after the Pharoah finally got the message. Led by Moses, God’s people were spared in the relentless attack and lived happily ever after in the ‘Promised Land’. Leaving us an epic ass-kicking tale for the history books.

4) The torment of Job

We all have our faults, some more than others. And for reasons inexplicable to us mere mortals, God saw some faults in poor Job and decided to give him the mother of all lessons. In spite of God’s acknowledgement that Job was the ‘Godliest’ man on Earth, He allows Satan to destroy Jobs flocks and possessions, kill his children and torture Jobs body with disease. But Job doesn’t complain, nope, no righteous indignation to be seen here. Instead, Job pleads with God for an answer to his sufferings. After a deafening silence, God finally responds with, well, nothing really. Something about the jerk store called and that was it. Job accepted his brutal ass-kicking and was rewarded by God for being a good sport about it.

5) Kicks Satan’s ass into the ‘Lake of Fire’

Okay, so I know what you’re thinking, ‘when did this happen?’. Yep, you’re right, this last entry is a little sneaky since it hasn’t actually happened yet. But in the book of Revelation we are given a blow-by-blow account of the fate that awaits God’s great adversary, Satan. At the end of the world God unveils the ultimate naughty or nice list and Satan finds himself on the former. In a series of nightmarish psychedelic visions featuring beasts with multiple heads and some whore called Babylon, the ‘Father of lies’ finally meets his demise. We are told that Satan will be hurled by God into a lake of fire to burn for all of eternity. An ass-kicking and an ass-burning to boot, ouch!